Feedback Should be More Work for the Recipient

I’ve been doing a ton of reading about the impact that feedback has on student learning over the past few weeks (see here).  It’s something that I’m passionate about AND something about my own practice that I’m trying to polish.

One quote rolling through my mind right now is this one: 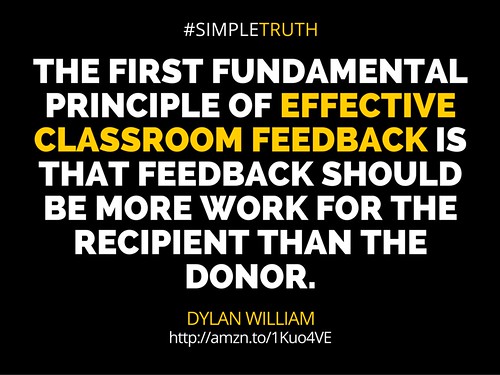 William’s argument — which he articulates nicely in Embedded Formative Assessment — is a simple one:  The primary purpose of feedback is to cause learners to think.

William’s argument — which he articulates nicely in Embedded Formative Assessment — is a simple one:  The primary purpose of feedback is to cause learners to think.

An example of William’s notion of effective feedback comes from the math classroom.   He argues that instead of collecting homework, marking problems right and wrong and then handing papers back with a grade, a teacher could tell each student nothing more than the number of wrong answers that can be found on their papers.  Then, students should be held accountable for finding and correcting each mistakes on their own.

William shares another example from the language arts classroom.  He argues that instead of correcting grammar and punctuation mistakes FOR students, teachers should make simple marks in the margin indicating sentences where students have made errors.  Then, students should be held accountable for reviewing sentences with marks indicating errors, finding their own mistakes, and making corrections.

Both of these practices require LESS of the classroom teacher, don’t they?  It’s WAY easier to simply indicate mistakes than it is to cover a student’s paper in detailed corrections.  And both of these practices require MORE of our students, who have to carefully return to their work — something that rarely happens once papers are passed back in traditional classrooms.  The REAL value in these examples rests in the reflection that students do after feedback is given.

What’s keeping you from giving more?

Effective Feedback is a Work For/Work On Process

@shareski is Right:  My Students CAN Assess Themselves